In the 1950’s the Department of Education instigated a program throughout the state which saw several new High Schools in the Newcastle district built.

Cardiff High was conceptionalised in 1957 and the plan formed to have the school up and running by 1961 on a dairy farm that had once belonged to the Edwards Family during the 19th and early 20th centuries.

It wasn’t until the last week of school in December 1962 that the first students arrived. Only the 1st and 2nd form (the equivalent of Years 7 and 8) students attended as the school was still being constructed.

The first school magazine was produced in 1962, while the school was physically divided amongst its host schools. Munibung was named after the mountain ridge overlooking Cardiff, and is possibly the corruption of an Aboriginal word meaning “the meeting of the tribes.” It has a proud tradition of half a century of uninterrupted publication. Digital copies of Munibung are available from the Munibung section of the school's website.

Despite the tight squeeze in the early 1960s, the foundation years of the school were productive ones, establishing traditions that have endured for over half a century.

The first principal, Mr L.T. Richardson, designed the school badge and chose its motto, “Know Thyself”. The shield within the badge, surrounded by a laurel wreath, contains representations of education – the stylus, (writing), the tree (knowledge), the lantern (learning) and the book (wisdom).

The growth of Cardiff High School continued with the construction of a new dedicated Library building started in 1982 and opened to staff and students in 1984.

The success and growth continued into the 1990s with the establishment of a special IO unit and the forging of a sister-school relationship with Tanagura Junior High, in Japan. Our first exchange students visited Tanagura in July 1991, beginning the tradition of regular group exchange visits between the 2 schools which are still carried on today

The new millennium brought with it a huge change in technology and learning advances. The internet was more readily available and bursting with information with the school commissioning its third technology centre (computer room) and a connected classroom with video conferencing capabilities.

In 2008 the school road the wave of the digital education revolution with the installation of wireless in every classroom and staffroom. This allowed staff and students to have access to laptops and the internet anywhere within the school. 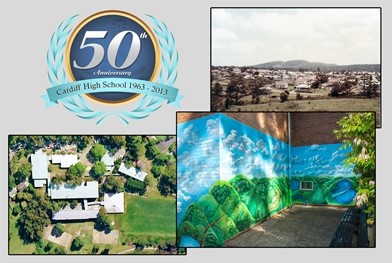 In 2012 the school’s hall and canteen were renovated and revamped, as well as a new Covered Outdoor Learning Area constructed.

In 2013 Cardiff High School celebrated its 50th Anniversary with an open day. Ex-students and staff as well as current and new attended and were given a glimpse into the past, present and future of Cardiff High School. The science labs were also upgraded in ready for the 21st century science education.

A special 50th Anniversary Commemorative Edition of Munibung was produced and available to download from the Munibung section of the school's website.

The school is still growing with 2015 seeing the establishment of a new Learning Support Team, Special Education faculty and classrooms.

Return to top of page

We would like to pay our respects and acknowledge the traditional custodians of the land, the Awabakal people, and pay respect to Elders both past and present.

Copyright for this website is owned by the State of New South Wales through the Department of Education. For more information go to http://www.dec.nsw.gov.au/footer/copyright.